Age Related Macular Degeneration (AMD) is a deterioration or breakdown of the macula (center of the retina) and is one of the most common causes of poor vision in people over age 60. The visual symptoms of AMD involve the loss of central vision (reading, recognizing faces, etc.), while peripheral vision is unaffected. While age is the most significant risk factor for developing AMD, heredity, blue eyes, high blood pressure, cardiovascular disease, and smoking have also been identified as risk factors.

While AMD is one disease, it may be categorized into two forms: wet and dry. Both are explained in more detail below.

The most common form of AMD is the dry form (called atrophic or non-exudative). Dry AMD is associated with thinning and slow deterioration of the retinal cells in the macula. It is usually slowly progressive and may take many years to develop.

Some factors involved in the degenerative process of the macula, such as our gender and genetics, are beyond our control. However, there are some steps you can take to lessen your risk factors:

*Consult your physician before adding a nutritional supplement to your diet. 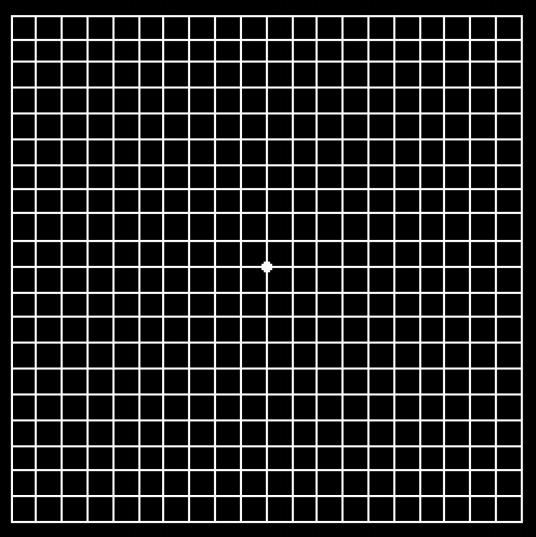 Directions for Use of Amsler Grid

If diagnosed with macular degeneration, monitor your vision with an Amsler grid.

The wet form of AMD (called exudative) is much less common than the dry form, but it can produce rapid visual distortion and loss, and can be much more serious. This is not a separate condition, but is a complication of dry AMD. All patients with dry AMD should be monitored for the development of the wet form.

In this condition, abnormal blood vessels may grow into the macula from a layer beneath the retina, leaking fluid and blood, creating distortion or a large blind spot in the center of your vision.

Anti-VEGF (vascular endothelial growth factor) intravitreal injections are the mainstay of treatment for wet macular degeneration. These injections, when performed on regular basis, have shown a significant benefit in the treatment of wet AMD. If the blood vessels are not growing beneath the center of the macula, laser treatment can sometimes be effective. 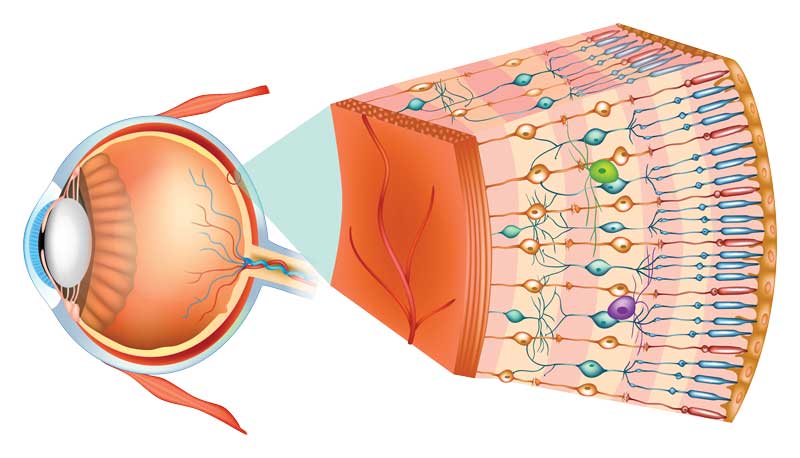 Our goal is to contact you by phone within 24 hours of submission. If you find yourself in an EMERGENCY situation, please CALL 732-774-5566 instead.

Dr. Glatman utilizes intravitreal injections as a common treatment modality for various retinal diseases including exudative macular degeneration, diabetic maculopathy, and macular edema associated with retinal vein occlusions. The injections are painless and done in under 15 minutes in the comfort of our office.

A Posterior Vitreous Detachment (PVD) is a condition in which the vitreous gel (gel that fills the cavity of the eye) liquefies and separates from the retina (the inside layer of back of the eye).

The vitreous is thicker where it attaches to the optic nerve. When the vitreous separates, this thickening, along with other opacities, will float in the center of the eye. When light enters the eye, these opacities cast a shadow on the retina. These are “floaters” and will usually be more obvious in brighter light. As the vitreous peels from the retina, it may stimulate the retina causing flashing lights. Rarely, it may pull a piece of retina with it, causing a retinal hole or tear. This may lead to a retinal detachment. This is usually a sudden event, but may also occur slowly over months.

Increasing age and nearsightedness play a role in determining the onset of posterior vitreous detachment. Broadly speaking, the condition is common for older adults and over 75% of those over the age of 65 develop it.

Posterior vitreous detachment does not directly threaten vision and most of the time is benign. Occasionally, a PVD may cause a membrane to form on the retina (epiretinal membrane), which may affect vision to varying degrees.

PVD may also occur with trauma or around the time of cataract surgery (within weeks or months of the surgery).

When a Posterior Vitreous Detachment occurs there is a characteristic pattern of symptoms:

The flashes usually subside in the first few weeks. Sometimes, an occasional flash, especially when going from light to dark, may persist for a while, but will almost always resolve completely. The floaters will always be present, but, with time become a non-issue, showing up occasionally, especially in brighter light.

A dilated exam is recommended at the time of new symptoms of flashes and/or floaters. Therapy is not required or indicated for posterior vitreous detachment, unless there are associated retinal tears and/or detachment which need to be repaired.

Epiretinal membrane, is the technical name for “macular pucker or wrinkle.” The macula is the portion of the retina responsible for central, straight-ahead vision. Sometimes, a membrane resembling scar tissue grows on the macula. This membrane shrinks and contracts (puckers) the retina, distorting and/or reducing central vision.

Some causes of this condition include previous retinal surgery, retinal detachment, a blockage of a blood vessel in the eye, vitreous detachment, or ocular inflammation.

A macular pucker can sometimes be treated with membrane peeling surgery. If your condition progresses to the point that this type of procedure is required, we would refer you to a retinal surgeon.

When light enters the eye and makes its way to the retina that lines its back interior, it passes through a gel-like substance (sometimes called “vitreous” or “vitreous gel”) that fills the center of the eye. Sometimes this vitreous gel shrinks and pulls away from the retina, causing a posterior retinal detachment (“PVD”). PVD is not necessarily an emergency. However, the tugging that occurs as the vitreous gel pulls away sometimes causes the retina to tear or detach from the inside. The tear may allow vitreous gel to move behind the retina and interfere with its access to the blood and oxygen it needs to function properly. Permanent loss of vision may result unless the retina is reattached promptly.

Vitreous gel often develops clumps that are perceived as dark spots, specks, or string-like shapes that float across the visual field. These “floaters” are most often the normal result of the gel aging and breaking down and are not necessarily an indication that there is a problem, but they can be caused by blood or other debris released into the vitreous when the retina is torn.

Brief flashes or sparks of light that appear suddenly at the edge of the visual field can be a sign that the retina is becoming detached.

Floaters and flashes are often the first signs of the risk of retinal detachment. However, a detachment can take place without warning.

Call our office immediately if you experience:

Risk of developing diabetic retinopathy increases over time. An adult who has had diabetes for 15 years or longer has an 80% chance of experiencing damage to retinal blood vessels.

When diabetes affects the ocular blood vessels, they may develop leaks or contribute to the formation of scar tissue; these problems reduce the retina’s ability to detect and transmit images.

There are two main types of diabetic retinopathy: background (BDR) and proliferative (PDR). Treatment is available for both types.

There are many diagnostic tools that are used to diagnose diabetic retinopathy including OCT imaging, fluorescein angiography, and fundus photography. Various treatment options are available including intravitreal injections targeting leaky blood vessels and panretinal as well as focal laser treatment.